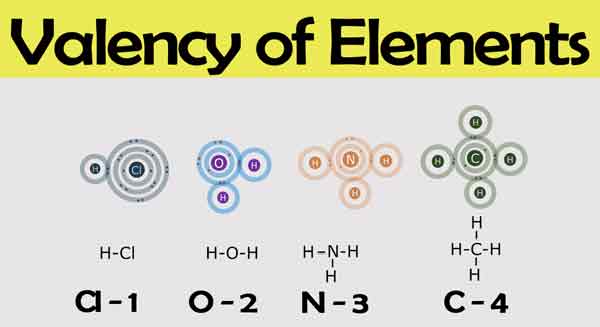 Valency of elements is the property that appears when one atom of an element combines with atoms of other elements.

The arrangement, of course, may also involve metastable structures composed of sublayers that can be reached by the outer sublayer.

It is offset by the number of electrons or shared electron pairs of atoms in the material.

Valency of elements means the number of atoms gaining and losing electrons when atoms combine with each other.

Valence is also a property that elements exhibit when forming compounds.

A magnesium ion (with a valence of +2 and two electrons lost) must be bound to two chloride ions. If the valence algebraic sum of the ions of the formed compound is not zero, the outermost electron layer of the anion and cation constituting the ionic compound and the atom of the covalent compound molecule cannot be made into a stable structure. In this way, stable compounds cannot be formed.

The predetermined elemental molecule where valency element is zero, regardless of ionic compounds or covalent compounds, n-valence anion algebra and its composition are zero. Ionic compounds, Example: NaOH (sodium n-1 is the valence of divalent, hydroxide ion valence is a negative monovalent, mutually offset by a zero-valent compound such wording on the establishment)

Note: The “valence” of an element is an important property of an element, which is manifested only when combined with other elements. That is when the element exists in a free state, that is, when it is not combined with other elements to form a compound, the valence of the elemental element is “0”. For example, metals such as iron, nonmetals such as carbon, and rare gases such as helium.

(Note: the valence of the atoms in the element is 0)

Determine the valence of the elements in the compound

(1) There are positive and negative valences

(5) Some elements may have significantly different valences in the same substance.

(6) The algebraic sum of the positive and negative valences in the compound is 0.

How to find Valency of elements

Valence is a property of an element that is manifested only when the elements are fused to each other. The algebraic sum of positive and negative valences in a compound is equal to zero, which is the criterion for valence. Generally speaking, there are the following methods:

1. The formula for the Valency of elements A in AmBn compound:

2. Find the valence formula of the unknown valence element in the multi-component compound:

3．Determine the Valency of elements (or an atomic group) based on the number of positive and negative charges.

Exercise1: The chemical formula (molecular formula) of salt is Rm (SO4) n. What is the valence of R?

Exercise2: In a 7: 4 mass ratio of nitrogen and oxygen, what is the valence of nitrogen?

Example 1:- Determine the valence of the Mn element in the compound K2MnO4.

Therefore, the valence of the Mn element in K2MnO4 is +6.

Analysis: The key to this question can be said to be to first determine the valence of the two elements X and Y when forming a compound. Because the outermost layer of X has only one electron, the highest positive price is +1, and the outermost layer of Y is 6 electrons, which is 2 away from the stable structure of 8 electrons.

Therefore, the lowest negative price is -2, so X, Y The molecular formula of the formed compound is X2Y, and B should be selected.

Example 3:- The relative atomic mass of an element is 59, the mass fraction of the element in the oxide is 71%, and its valence is?

Analysis: Let the chemical formula of the oxide of this element be RxOy

Therefore, the chemical formula is R2O3, and the R valence is +3, so choose C.

Example 4:- A metal oxide reacts with a sufficient amount of hydrochloric acid, and the ratio of the number of molecules of chloride to water is 2: 3, then the valence of the metal is?

Analysis: Suppose the chemical formula of the generated chloride is RClx, according to the ratio of the number of molecules in the title RClx: H2O = 2: 3 According to the law of conservation of mass, it can be known that the atomic type and number of each element before and after the reaction are unchanged, and H and Cl in the product are unchanged.

Analysis: Let the element valence be + x, and the relative atomic mass be MR

In summary, A and D should be selected.

Example 6:- A metal element ag with a relative atomic mass of M reacts with a sufficient amount of dilute sulfuric acid to generate Bg hydrogen, and the valence of the metal element in the reaction is?

Analysis: Let the metal valence in the reaction be + x valence, then the metal element has the following relationship with the formation of H2:

Therefore, B should be selected.

Analysis: The valence of M is numerically equal to the value of z

Therefore, B and D should be selected.

DDT full Form || What was DDT used for? || Is DDT harmful to humans?