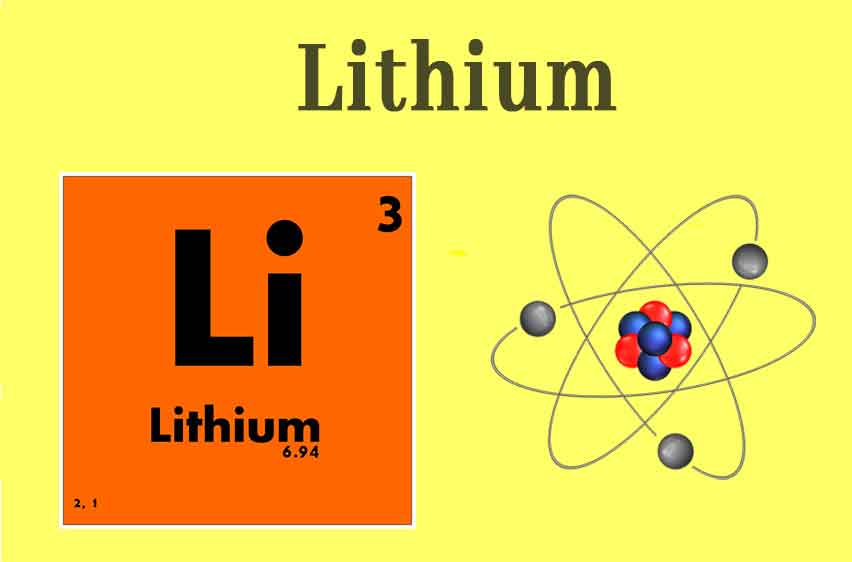 Lithium (Li) is a silver-white metal element that is soft and has the smallest density. Used in atomic reactors, light alloys, and batteries.

Lithium and its compounds are not as typical as other alkali metals, because lithium has a large charge density and a stable helium -type two-electron layer, which makes it easy for lithium to polarize other molecules or ions, but it is not itself vulnerable to extreme into. This affects the stability of it and its compounds.

The first lithium ore, Petalite (LiAlSi4O10) was created by Brazilians (Jozé Bonifácio de Andralda e Silva) was discovered on a small Swedish island called Utö in the 1890s. When thrown into the fire, it emits a strong crimson flame, and Johan August Arfvedson of Stockholm analyzed it and concluded that it contained a previously unknown metal, which he called lithium (lithium). He realized it was a new alkali metal element. Unlike sodium, however, he failed to separate it electrolytically.

In 1821, William Brande electrolyzed a small amount of lithium, but this was not enough for experiments. It was not until 1855 that German chemist Robert Bunsen and British chemist Augustus Matthiessen electrolyzed lithium chloride to obtain large chunks of lithium. Lithium in English is Lithium, derived from the Greek lithos, meaning “stone”. Lithos pronounced li in the first syllable.

Lithium, with an atomic number of 3 and an atomic weight of 6.941, is the lightest alkali metal element. The element name is derived from Greek, meaning “stone”. Founded in 1817 by Swedish scientist Afvecon during the analysis of the perlite feldspar mine. The main lithium minerals in nature are spodumene, lithium mica, and lithium-permeable

Feldspar and apatite. Lithium can be found in human and animal organisms, soil and mineral water, cocoa powder, tobacco leaves, and seaweed. There are two isotopes of natural lithium: lithium 6 and lithium 7.

Lithium is different from other alkali metals in that it reacts slowly with water at room temperature, but can react with nitrogen to form black lithium trinitride crystals. The weak acid salts of lithium are hardly soluble in water. Of the alkali metal chlorides, only lithium chloride is easily soluble in organic solvents.

The flame of lithium volatile salts is dark red, which can be used to identify lithium. Lithium is easily combined with oxygen, nitrogen, sulfur, etc., and can be used as a deoxidizer in the metallurgical industry. Lithium can also be used as a component of lead-based alloys and light alloys such as beryllium, magnesium, and aluminum. Lithium has important uses in the atomic energy industry.

Silver-white metal. It is soft and can be cut with a knife. It is the lightest metal and has a lower density than all oils and liquid hydrocarbons, so it should be stored in solid paraffin or white petrolatum (lithium also floats in liquid paraffin).

The density of lithium is very small, only 0.534g / cm³, which is the smallest of the non-gaseous elements.

Because the lithium atom has a small radius, it has the lowest compressibility, the largest hardness, and the highest melting point compared to other alkali metals.

The lower the temperature, the greater the degree of transformation, but the transformation is incomplete. At 20 ° C, the lattice constant of lithium is 3.50 Å, and the conductance is about one-fifth that of silver. * Lithium easily fuses with any metal other than iron.

The flame reaction of lithium is purple-red.

There are seven isotopes of lithium, two of which are stable, Li-6 and Li-7. In addition to being stable, the longest half-life is Li-8, which has a half-life of 838 milliseconds, followed by Li. -9, with 187.3 milliseconds, after which the other isotopes have half-lives below 8.6 milliseconds.

Li-6 has a strong ability to capture low-speed neutrons and can be used to control the rate of nuclear reactions in uranium reactors.

It can also be used in radiation protection and prolonging the service life of nuclear missiles and in future in nuclear-powered aircraft and spacecraft. Li-6 in atomic reactors can be obtained by tritium neutron irradiation, and tritium can be used to achieve thermonuclear reaction. Li-6 can be used as a coolant in nuclear installations.

Lithium is a chemical element. It is a metal with strong metal activity (the strongest metal is cesium). Its chemical symbol is Li, its atomic number is 3, and two of its three electrons. Distributed in the K layer and the other in the L layer. Lithium is the lightest of all metals.

Because lithium has a large charge density and a stable helium -type two- electron layer, it is easy for lithium to polarize other molecules or ions, but it is not easy to polarize itself. This affects the stability of it and its compounds.

Although the hydrogen standard potential of lithium is the most negative, it has reached -3.045. However, due to the low solubility of lithium hydroxide and the exotherm when lithium reacts with water, it cannot melt lithium, so the reaction between lithium and water is not as intense as sodium, and the reaction is in progress after a period of time.

The nitrogen oxide film on the lithium surface is dissolved, thereby making the reaction more violent. Reacts readily with hydrogen at about 500 ℃, produce lithium hydride , is the only form stable enough to melt without decomposition of the hydrides of alkali metals, ionization energy of 5.392 eV, with oxygen, nitrogen, sulfur and other compounds can, is The only alkali metal that reacts with nitrogen at room temperature to form lithium nitride (Li₃N).

Darkens due to susceptibility to oxidation. If lithium is thrown into concentrated sulfuric acid, it will quickly float on sulfuric acid, burn and explode. Lithium and potassium chlorate can also react explosively if they are mixed (vibrated or ground).

The chemical reaction equations for some lithium reactions are described below:

Lithium hydride reacts violently with water and produces a large amount of hydrogen. After the decomposition of two kilograms of lithium hydride, 566 kiloliters of hydrogen can be released.

When the plane crashed and landed on the water, as soon as it touched the water, lithium hydride immediately reacted with the water, releasing a large amount of hydrogen, which inflated the life-saving equipment.

In 1855, Bunsen and Marchson used electrolytic melting of lithium chloride to produce it. Industrial lithium production was proposed by Gensha in 1893. It took 76 years before lithium was identified as an element to industrial production.

The production of lithium from electrolytic lithium chloride consumes a large amount of electricity, and each ton of lithium smelted consumes up to 60,000 to 70,000 degrees.

The industry can use the following methods to prepare lithium elemental:

Lithium chloride was calcined and dried at a temperature not exceeding its melting point (602 ° C) for 1 h.

Putting the isotope (6Li) with mass number 6 into the atomic reactor and irradiating it with neutrons can obtain tritium. Tritium can be used for thermonuclear reactions and has important uses.

Lithium is mainly used as a thickener for grease in the form of lithium stearate. This lubricant combines high water resistance, high-temperature resistance, and good low-temperature performance. Lithium compounds are used in ceramic products to act as co-solvents.

It is also used as a deoxidizing agent or dechlorinating agent in the metallurgical industry, as well as lead-based bearing alloys. Lithium is also an important component of beryllium, magnesium, and aluminum light alloys.

Lithium is closely related to daily life. Lithium-ion batteries used in digital products such as laptops, mobile phones and Bluetooth headsets carried by individuals are rich in lithium.

Lithium has been left out for quite some time after it was discovered, and only a few lithium compounds have been used in the glass, ceramics and lubricant sectors.

The main industrial use of lithium in the past was as a thickener for lubricants in the form of lithium stearate. Lithium-based greases have both high water resistance, high-temperature resistance and good low-temperature performance. If you add lithium lubricant to some parts of the car once, it is enough to use the car until it is scrapped.

In the metallurgical industry, the use of lithium can strongly react with oxygen, nitrogen, chlorine, sulfur and other substances, acting as a deoxidizer and desulfurized.

In the copper smelting process, adding lithium in the range of 100,000 to 10,000 can improve the internal structure of copper, make it denser, and increase the electrical conductivity of copper. Lithium can remove harmful impurities and gases in the casting of high-quality copper castings. Among the high-quality special alloy steels required by modern times, lithium is the most ideal material for removing impurities.

1kg of lithium can release 42998kJ of heat after combustion, so lithium is one of the best metals used as rocket fuel. The energy released by 1kg of lithium through a thermonuclear reaction is equivalent to the combustion of more than 20,000 tons of high-quality coal.

If lithium or lithium compounds are used to make solid fuels instead of solid propellants and used as the propulsion force of rockets, missiles, and spacecraft, they not only have high energy, high burning speed but also have a high specific impulse. It depends on the magnitude of the specific impulse.

If lithium is added to glass manufacturing, the solubility of lithium glass is only 1 / 100th of that of ordinary glass (approximately one ten thousand grams of glass in each ordinary glass of hot tea). After adding lithium, the glass becomes “never soluble” And can resist acid corrosion.

Pure aluminum is too soft. When a small amount of lithium, magnesium, beryllium and other metals are added to the aluminum to melt it into an alloy, it is both light and particularly hard. Using this alloy to make aircraft can reduce the weight of the aircraft by 2/3. The lithium plane can be carried away by two people. Lithium-lead alloy is a good anti-friction material.

It was after the discovery of its excellent nuclear properties that lithium actually became a world-renowned metal. Because of its unique properties in the atomic energy industry, it is known as a “high-energy metal.”

The lithium battery is a high-quality energy source developed in the 1930s and 1940s. It has been widely used in various fields due to its high open-circuit voltage, high specific energy, wide operating temperature range, discharge balance, and self-discharge electron. Is a promising power battery.

Using lithium batteries to generate electricity to start a car, the travel fare is only 1/3 of that of a normal gasoline engine car. Plutonium is made from lithium and is used to start the atomic battery pack. It does not need to be charged in the middle and can work continuously for 20 years. To solve the fuel crisis and exhaust pollution of automobiles, one of the important ways is to develop new batteries such as lithium batteries.

Lithium fluoride has extremely high transparency to ultraviolet rays, and the glass made with it can insight into the mysteries hidden in the deepest part of the Milky Way. Lithium glass can be used to make television picture tubes.

The organolithium compound reacts with an organic acid to obtain an addition product that can be hydrolyzed to a ketone. This reaction is used in a step of vitamin A synthesis. Organolithides are added to aldehydes and ketones to obtain addition products that can produce alcohols during hydrolysis.

Lithium and ammonia by the reaction of the lithium-amino be used to introduce an amino group, also is used as a dehalogenating agent and a catalyst.

What is the use of plaster of Paris?