Ammonia gas was first obtained by Joseph Priestley in 1771 by heating the ammonium and lime together and named it Alkaline Air.

In some quantities it is found in the atmosphere. In places where animals rot, its quantity is more than expected in the air. In nature it is also found as its salts.

In nature, it is found as ammonium chloride (NH4Cl) and ammonium sulphate [(NH4)2SO4].

Addition of Nitrogen and Hydrogen: Ammonia is obtained by adding nitrogen and hydrogen at about 500°C temperature and 200 atmospheric pressure in the presence of
catalyst (Iron).

From Calcium Cyanamide: Ammonia is obtained by the action of water vapor on calcium
cyanamide.

By the action of water on Magnesium Nitride:

From Carbonic Compounds: When some nitrogen containing organic compounds are heated with soda lime, ammonia is obtained.

In the laboratory, ammonia is made by heating the ammonium chloride with a quenched lime.

In a rigid glass tube, a mixture of ammonium and quenched lime is heated. The received ammonia gas is collected from the gas jar by downward displacement of air.

Before being collected in a gas jar, it is passed onto CaO, which removes the moisture of this gas. 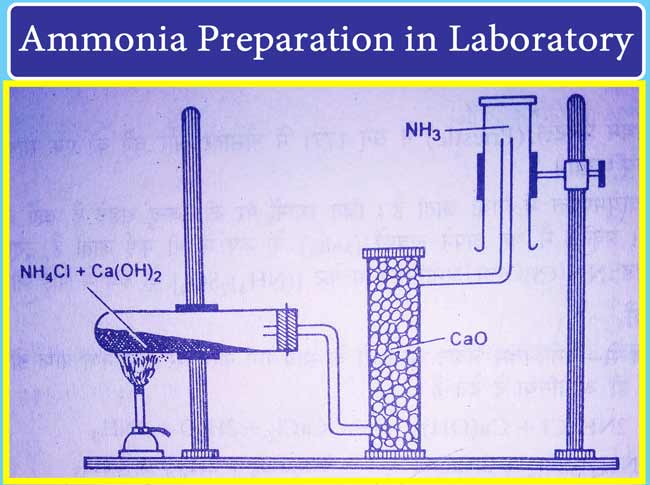 The industrial manufacture of ammonia is done by the following methods:

In this method, nitrogen and hydrogen combine to form ammonia gas.

In this activity, heat is generated and heat is increased. This is an exothermic reversible reaction. In this reaction the volume of the reactants decreases.

According to the principle of le-chatelier, it is necessary to have low temperature and high pressure in this action. In this way more ammonia can be obtained and the action
velocity can be increased.

Therefore, in this reaction the temperature is kept at around 500°C. The pressure value is kept equal to about 200 atmospheres.

In this method any of the following catalysts can be used – 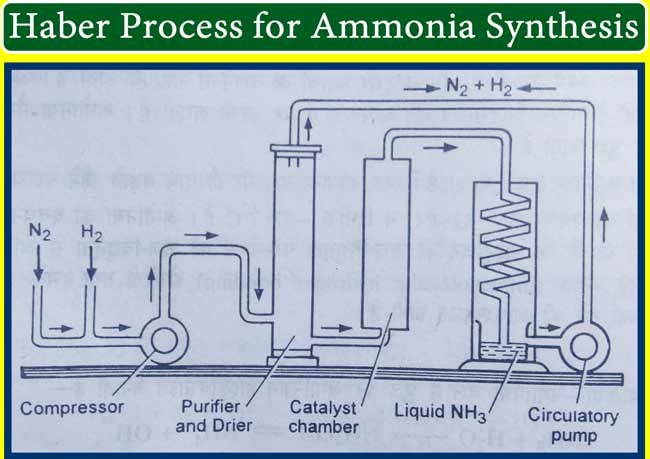 In the industrial manufacture of ammonia by the Haber method, a mixture of iron and molybdenum is often used as a catalyst. Molybdenum catalyst acts as a promotor.

Nitrogen gas obtained from the atmosphere and hydrogen from the water gas are mixed in dry state in a ratio of 1: 3 and flow into a chamber at 200 atmospheric pressure, where the catalyst is kept at around 500°C.

A mixture of CaCN2 and carbon is obtained when CaC2 and nitrogen are heated to almost 1100°C temperature. Also called Nitrolime and which is also used as fertilizer.

Ammonia gas is obtained by its reaction at 180°C and 3-4 atmospheric pressure with water vapor.

In the manufacture of coal gas: As a side product, ammonia-rich liquor is obtained when making coal gas, which contains ammonium salts in large quantities. Ammonia gas is
obtained by boiling it with lime water.

It is a colorless and intensely smelling gas. Due to this, tears start coming out of the eyes. This can also be fatal due to an overdose.

The molecular weight of ammonia is 17 and density is 8.5. Hence it is lighter than air. This is why in the laboratory it is collected by downward displacement of air.

It is soluble in water. It also dissolves in large quantities in water. At normal temperature, its water content is 89.9 grams per 100 ml. Like other gases, its solubility in water decreases at higher temperatures.

Ammonium hydrosidae is a valid additive. Hence, aqueous solution of ammonia is alkaline and conductor of electricity. 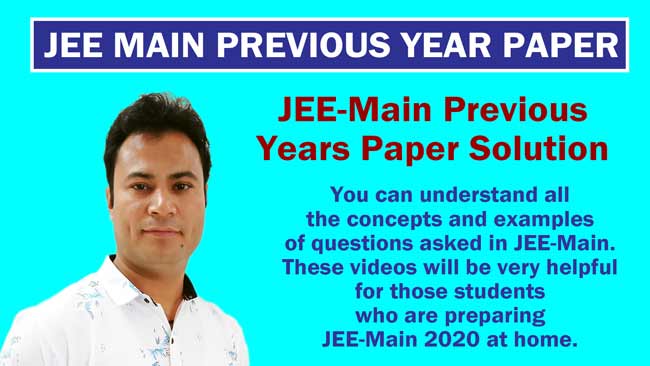 Ammonia gas does not burn itself nor is it helpful in burning other substances. It does not burn when ammonia gas is ignited in the air. But it starts burning due to excess of oxygen. She extinguishes when a burning candle is carried in a jar of ammonia gas.

The critical temperature of ammonia is 133°C. Therefore, it keeps on increasing pressure at normal temperature.

Alkaline properties: It reacts with acids to form salts.

Combustion: Ammonia does not burn itself or helps in the burning of other substances. It burns with yellow flame in excess of oxygen.

Nitric oxide and water are obtained when a mixture of ammonia and oxygen gas flows through a hot plate of platinum.

Thermal Decomposition: Ammonia is a permanent additive but dissociates into components at high temperatures or when electric sparks flow.

Action with halogens: If more amount of ammonia is taken with less amount of chlorine, nitrogen gas is obtained.

If an excess amount of chlorine is treated with a low amount of ammonia, then nitrogen tri-chloride is formed, which is a highly explosive substance.

Ammonia has similar action with bromine and iodine.

Reaction with Magnesium: It reacts with magnesium metal at high temperature to form magnesium nitride (Mg3N2).

This Neet Hindi Question Samples will be very helpful for those students who are preparing NEET-2020 at home.

Note: If you are not able to see Download button Click on “View Non-AMP Version” on the bottom of this Page. 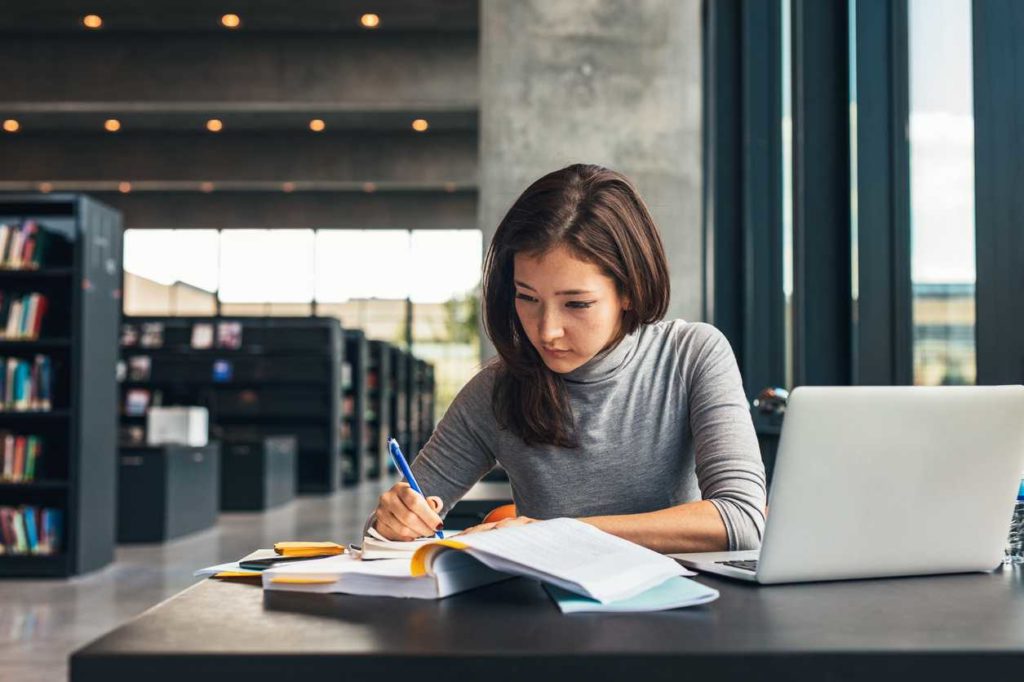 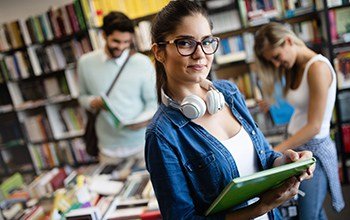 Its aqueous solution (NH4OH) combines with some salts to form complex compounds.

1) When a white precipitate of silver chloride (AgCl) is added in large amount with aqueous solution of ammonia, ie ammonium (NH4OH), dissolves due to the formation of complex compounds called diamine silver chloride[Ag(NH3)2Cl].

Copper hydroxide is insoluble in water and its color is greenish blue. Therefore, greenish blue precipitate is obtained.

Reaction with Silver Nitrate: Aqueous solution of ammonia reacts with silver nitrate (AgNO3) to form a white brown precipitate of silver oxide(Ag2O) which dissolves in excess of ammonium to form a merged complex salt. The solution thus obtained is called tollen’s reagent.

Reaction with mercurous chloride: A dilute aqueous solution of ammonia in mercuric chloride solution forms a mixture of mercury and mercuric amino chloride, which is black in color.

Action with Nessler’s reagent: The alkaline solution of Potassium tetraiodomercurate(II) is called Nessler’s reagent. On reaction with ammonia, Iodide of Millon’s base and a brown precipitate is obtained. This reaction is also used to test ammonia and ammonium ions.

Following is the bond formula, electron point formula and orbital diagram of ammonia-

The hybridization of nitrogen atom in ammonia is of the sp3 type and has a pyramidal shape. The Basic property of ammonia is due to the lone pair of electrons present on nitrogen in it.